Skip to content
Posted on 6. February 2021 by Fabian Leuthold 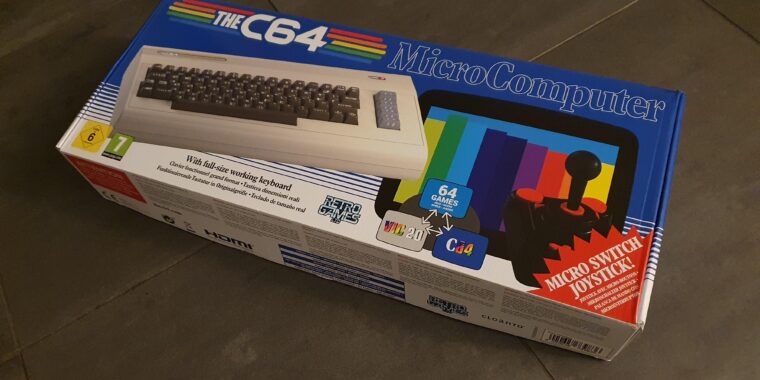 It was the machine one wanted to own as a boy back in the eigthies, long before the Amiga had been acquired by Commodore Inc. – the Commodore 64. At that time, PCs were presenting monochrome character-art pictures, games had to be played using the cursor keys and from time to time one could hear beeping sounds. The C64 on the other hand had 16 colors, joystick ports and 3 sound coming from it’s SID – the sound interface device – and was even able to play digitized samples up to 15 seconds.

It evolved to be the most successful homecomputer ever sold, estimations range from 12 to 30 million devices. This is probably one of the reasons why hardly any software company wanted to miss the opportunity to offer their software for this device as well.

This is all history, however if you feel like playing old C64 games again today, many doors are open to you.

How to get a working C64 today?

The fastest way to get a C64 to play old games or run programs is to get an emulator. An emulator is a software, which emulates the hardware of a Computer on another one. You can download one of the many C64 emulators available here. Get it, install it and off you go. Now choose the games you want to play from the Snoopy universe. Snoopy used to be a famous C64 crack – the god of the scene back in the 80’s – and in the meanwhile has built up the biggest game collection online. Even today, he continues to add new titles every few months. I have been supporting him on and off for years because I really appreciate his precious work and his unique service to preserve the huge software archive for posterity.

Alternatively you can get a raspberry pi running an emulator, a C64-OS like presented in this project or run games in a pure Javascript based emulator in your browser.

But if you’re a really C64 fanatic, you’d probably check the new device, brought to us by retrogames ltd: The C64! With this device you really feel like being back in the eigthies.

It’s a full-sized C64 with the legendary breadbox design we’ve come to know and love. Just unwrap it, connect it to a TV set or a beamer via HDMI and there you go.

There are already 64 pre-installed games, which can be conveniently selected and started via a menu using the joystick. Additional programs can be loaded via a USB stick as desired.

The device is really plug-and-play. A few minutes after unpacking the new ‘The C64’ you can start having fun and play the games contained in the distribution.

Besides the HDMI cable and the power supply the scope of delivery includes a high quality joystick featuring micro switches and an instruction manual in the design of its ancient counterpart, however, without the explanation of the basic command set. 🙁

The Connections to the outside World

The device has 3 USB ports to connect Joysticks or USB-sticks, one micro USB port for the power supply and a HDMI port for 720p HD visuals, at 60 Hz or 50 Hz. Unfortunately the USB-Sticks cannot be accessed via the command-line from the C64 Basic, but one needs to access it via the internal Carousel mode and navigate the filestructure and select the file for execution there.

The C64 from retrogames ltd has a fully working basic interpreter, all commands work as expected, even the few pokes you might remember from the eighties, like “POKE 53280,0” to switch the screen background color to black or the like. Unfortunately, there is no possibility to store written programs on a USB stick and reload them later. This limits the want to write larger programs or even games in Basic. This would really be a great improvement.

From a didactic point of view, it currently makes more sense to use a Raspberry Pi together with an Ichigo-Jam Basic Image to teach programming basiscs to kids. First, the Ichigo-Jam Basic is more extensive than that of the C64 and second, programs can be saved and reloaded directly via the commanline.

However: For those who like to play legendary titles in an authentic atmosphere, ‘The C64’ offers everything a gamer’s heart could wish for!